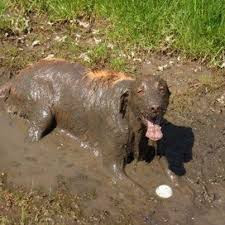 A wise man and his student were walking along a road early in the morning. As they walked the sharp bend on the road, it became a murky, deep swamp. As the wise man and the student decided to go around the swamp, they suddenly heard the cries of a dog. The dog was tangled in roots and could not free itself.

The wise man stepped forward into the water. The student objected. "Master," he said. "You do not know how deep it is. You could get trapped yourself. Leave it to its fate. It is only a dog."

The wise man waded into the muddy water. He untangled the dog and brought it to higher ground. The dog wagged his tail and licked his hand in gratitude. Then, it turned down the road and walked away.

"What a good dog!" exclaimed the  student. "He will receive many blessings in life."

The master said nothing. The two men continued on their way, slowly around the swampy area. After a while, the two men heard a crying dog. Searching behind a fallen tree, a different dog was trapped under a heavy limb.

This time, the master and the student waded into the dark water. Both of them hefted the tree limb and freed the dog. The master took up the dog and carried it to dry ground. Once the dog set all four feet to the ground, it turned and walked away.

"What an ungrateful dog!" spat the student, picking up a stone. "I will teach him a lesson!"

The wise master reached out and grabbed the arm of the student. "No, you will not," said the master firmly. "That dog owes us nothing. Not even gratitude. We saved that dog because it was the right thing to do and not for reward. It was our choice to save him."

The student dropped the rock and nodded. "Of course, master. I don't now what I was thinking."

The two men began again, walking carefully around the swamp. Soon, they heard another dog, crying and whining from the deeper part of the waters. The men found the dog struggling in a deep section full of weeds. It was being pulled down under the waters, and barely had time to breath before it was pulled under again and again.

The master and student rushed to its aid. The student held up the dog above the water while the master freed its legs. AS the two men brought the dog to the higher ground, the dog in its panicked state bit the student's arm. The student cried out and dropped the dog. The dog fell to the ground, tucked its tail, and began to run away.

"You ungrateful cur! You bit me!" yelled the student. He picked up a rock to throw at the hound.

But the master quickly grabbed his arm again. "No, do not hurt that dog," said the master firmly. "I know he bit you  and he hurt you. But in his panicked state, he did not know what he was doing. Show mercy and forgiveness for his reaction."

The student dropped his rock. "You are indeed wise, Master."

The two continued their journey again. They were nearing the end of the swamp when they heard the cries of a dog. This dog was sinking in a bog. It howled and cried loudly, as it struggled to swim.

The master and the student rushed to its aid. The student waded into the bog and the master stayed on the solid ground, holding out a strong tree branch to aid his student. The student grabbed the dog and struggled to bring it to dry ground.

But as the master pulled man and dog to land, the dog leaped from the waters and began to attack the master. The student stood and took the branch to defend his master. The dog turned from the master to the student. The dog leaped onto the young man and fought with him. The master came up behind the dog, picked it up, and threw it back into the bog. The dog whined and struggled against the waters. And the two men watched as the beast slowly sank and drowned.

The wise master tended the wounds of his student. The student asked, "Master, why did you throw the dog back into the water? Why not further away on dry land?"

"Because the dog would have come back to attack us again," said the master. "When saving a creature becomes detrimental to your life, it is best to throw it back where it came from and walk away."

The student nodded. Both men continued their journey out of the swamp.
Posted by Kaythia Star at 12:54 PM