Begin with a meditation of your choice. The point is to get into a very relaxed state of being.

It’s time to guide your dreams into reality. You are moving into a space in which your inward reality and your dream reality is becoming your outward reality and your woke reality. It is vital to keep focus on the highest good for yourself. You are not reliving your own history you feel supported. You are grateful for what has led you to this moment. This moment that is overflowing with universal abundance. Discipline and commitment are important. You are present. You have presence. Magic is manifesting all around you. Stop filtering. Stop trying to protect yourself from yourself. You love yourself. Allow yourself to grow. Stretch out from within. Feel the environment around you. Now is the moment of great things. Explore it now. Relax. Focus. Concentrate. Allow these words to flow over you The words become pictures, sound, smell, taste, feelings. They become the world around you. Explore a perfect day in your perfect life.

As I align my mind, body, and Spirit into my authentic self, my identity will shift. This is necessary and normal. Everything is fine. My ego structure is falling. Let it go. Allow the Ego to surrender. I will manifest my authentic self.

I know this difficult process is leading me to something better. This is my joyous adventure. My life is changing for the better. I may not feel like that now but I 'm still going to hold onto the belief that everything is happening for a reason. The reason will be revealed in due time.

I am Present. I have Presence. I am self-aware. I am mindful. I relax. I have focus. When feeling under pressure, I take a slow deep breath and I realize I am safe. I am strong. I have intelligence. I am creative. I am clever. I am content. I am satisfied. I am growing in a positive way. I am positive. I reframe the situation for my benefit. I value honesty. I value integrity. I value honesty above integrity. I discipline myself. I commit to myself and my core identity. Self-soothing skills have a positive effect. I realize radical acceptance. I am compassionate to myself. I am gracious to myself. I accept my present self without judgment. I am present. I have presence. The present is the only moment I have control over. I am mindful. I have focus. I am present.

Being happy is comfortable and secure. Success is comfortable and secure. Know that it is a positive feeling. It brings positivity into your daily living and life. Take comfort that you are making steps to improve yourself and your situation to a better quality of life and living. This feeling is secure and comfortable. There is nothing to fear from the feelings of success and accomplishment. There is nothing to fear from feeling content, happy, joy, and Peace at achieving a personal goal. You have achieved many things. You have self-actualized many goals along your joyous adventure, You are accomplished and successful.

I radically accept and unconditionally love the person I am. I am a wonderful person. I respect myself.

Your emotional body is healing. Your emotional body is releasing negative emotions. This release is natural and normal. There is nothing to fear from them. It is healthy to acknowledge them. Embrace them. Give your body permission and the freedom to feel them. Feel what you need to feel without judgment and at face value. Allow your heart to transmute and heal those emotions. Do this as many times as you need too. You may never know or understand the reasons for having these feelings. It is only important that you have them. Give yourself permission and freedom to feel them so that your heart can heal them.

(Here is where I incorporate my personal beliefs. You may want to take out my examples and use your own.)

Mighty I AM Presence, Heavenly Source, Please make manifest in me now the Sacred Violet Flame of Transmutation. Bring the Violet Flame into every cell, molecule, and atom of my body filling me totally and completely.
Blessed Violet Flame blaze into my Heart and expand out and around all of my bodies, physical, emotional, mental and spiritual, surrounding my entire Being with your Divine Grace, Love, Mercy, and Forgiveness.

Transmute all karma, negative thoughts, actions, deeds and energy that I have ever created at any time, in all dimensions, on all levels, in all bodies, through all time and space, past, present, and future, for all Eternity.Transmute everything that no longer serves me in body, mind, and spirit; including false beliefs, lower emotions, and physical challenges.
Transmute anything and everything that stands in my way of embodying the Ascended Being That I AM.

Prayer to Frigg for Joy and Abundance

Hear me Shining Lady of Asgard, all-seeing and all-knowing mother, at your command words are born, from your nod and tender smile life bursts into being. Oh Cunning Queen, Illuminate and Wyrd, Send your yellow flames of wisdom, wealth, and abundance to strengthen body and soul, make us fruitful in all things, like the Barley and the Flax that are your gifts. Upon your spindle of shimmering starlight, please weave for me a joyous fate.
Please make manifest in me now the Sacred Yellow Flame of Wisdom. Bring the Yellow Flame into every cell, molecule, and atom of my body filling me totally and completely with its Divine Radiance. Raise my vibration and frequency to the highest level possible for me at this time.

Transform my Aura that I attract positivity, Joy, wisdom, understanding, wealth, and abundance any time, in all dimensions, on all levels, in all bodies, through all time and space, past, present, and future, for all Eternity. Transform my Aura to attract only that which will raise my vibration, enrich my growth, grant prosperity, enhance my spiritual well-being and bring peace. Fill my soul with happiness and joy with the gentle warmth of the sun. Yellow Flames encode my physical, mental, and spiritual body to house the Ascended Being that I AM

Aho
Posted by Kaythia Star at 2:27 PM No comments:

Start with an Idea even if it isn't yours 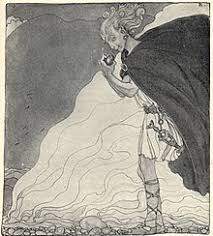 Wodin, a mighty Jotunn chieftain went to his friend, Loki, and told him the future of the Jotunns must begin. But it couldn’t begin until the clans unite. Only by working together could they oust the Dwarfs from their mountains and keep the Fey from their lands. Loki, having traveled Jotunnheim, knew of many clans and the places they gathered and camped. Wodin asked his friend to go out to them with his message of unification. Loki said he would do it because they were sworn-kin but also warned Wodin that he will not like the response. Wodin said he didn’t care. So, Loki went a-Viking (which in this case also means Networking)
When Loki returned there were various responses from each clan chief and none of them agreed. Wodin felt frustrated and he shouted. The Jotunn Chief asked Loki what he would do if he were chief.
“I wouldn’t seek to rule in the first place! I think you’re a fool to try to unite the clans. Jotunns do not respect anything that they can’t punch. That includes things like laws, boundaries, and words. I’d never allow myself or allow another to put me in such a situation. I’ll never be chief, I’m too smart.” The large Loki huffed at Wodin.
Wodin thought for a moment and then rephrased his question. “What advice would you give me then?”
“If you must, then my advice is to give them a reason to unite. A common thing or reason that can be shared throughout the clans,” replied Loki.
Wodin thought for a moment. “Well, we all hate Dwarfs,” he says.
“What?” asked Loki.
“We all hate Dwarfs,” repeated Wodin.
“That’s not what I-“ started Loki.
“Yes,” nodded Wodin. “Yes, let’s start a war with the Dwarfs.”

First Chapter of "Tale of the Three Loki's"
Posted by Kaythia Star at 2:06 PM No comments:

Treasure of the Master


So fishing through some old papers, I came across some old things of Master Mikal's. I imagine they came into my possession when his wife, Ginger, gave a box of things to Fiona. And I fished through the box for mementos. I found this picture, two songs, and some black fabric. I thought I had lost these items. But behold! Here they be.

I thought I would share them here. The Black Bull is one of his. He drew it. Master Mikal was an art teacher after all. So, I'm not shocked about the drawing. In addition, I would listen to Master Mikal talk about Loki, who was his favorite. So, the subject matter doesn't surprise me either.

The first song is Calontir Sings for Battle. I have never heard of it. Calontir doesn't sing it (this is definitely not the top five greatest hits) so I don't know the tune. I doubt anyone knows the tune (probably lost to time) and it very well may be what he considered a "failure" But it should be saved and shared to show that Masters must begin somewhere. And they have had some bad eggs of creation too. So here we go:

(Chorus) Now the kingdoms hear our voices, Listen to the war-drums' rattle
Crying out for power and glory, Calontir sings for battle

Up then brothers; take your spear, Join the host of Calontir
Nobles marching side by side, Let our Foeman hear our pride

Gather Fyrdmen on the field, Ready with the Spear and Shield
They will hear the battle cry, in our songs as we march by

Summon Huscarls from the land, Ready with a blade in hand
We will make the woodlands ring, with the songs that we will sing

Call the Knights and Masters bold, Ready weapons Meet the foe
With their fellows of the shield, As we sing "We will not yield"

When this army takes the field, know the weapons we will wield
Wall of shields to make us strong, and the power in our songs. 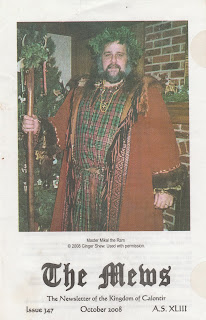 Yeah, it's not good. It's one of his early works. And like I said, Masters have to start somewhere. So, whenever I feel like I could've done better, wrote a stinker, or just plain failed. I think back to this little gem. I don't feel so stupid.

So, here is the second treasure. And believe me, there is NO glitter or gold here. It stinks worse than the first. The name of this one is Look to the East!

In a land of wonder, an age of strife
Honor and Courage is what we live by
But men from the West of honor they knew not
Death and destruction is what they proclaim

And then I knew what I must do
I donned on my armor, gave Allah my soul
And to my horse, into battle, we rode
My sword tasted blood
and the dead knew my name


The Master teaches beyond his resting place. Master Mikal the Ram showed me that not everything I do is going to be good. Sometimes, its gonna stink like Innolwoda Kaka! But that ok. We rise above. Go forth and do better, Helena. He never said that but I always imagine that he did.

Posted by Kaythia Star at 12:55 PM No comments: