Some more of Loki's Lies: The Three Loki's 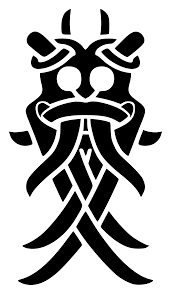 Loki says,
“I haven’t told you about my mother, Laufey. Her name means "magic knot". Of course, Loki means "entangled" not "knot" or "loop". The root word loop has a meaningless suffix (in a way) to make it different from the word "knot" because the difference between a 'loop" and a "knot" is how taught the thread is. So, my name means "tight loop" or –better still- "entangled".

I interpreted his message to mean that his name indicates that his loop, knot, or entanglement in his thread could be undone by a patient weaver.  Meaning, a devoted person could undo his fate or destiny. Unlike his mother, Laufey. If Lau means "knot" it must mean "unbreakable knot of magic" or maybe "unbroken knot of magic" Both seem to be plausible.

Loki goes on,
“Anyway, my mother’s side- or I should say biological mother’s- had a total of three male relatives who bore the name. I don't care what the stupid books say. I’m telling you.”

He often repeats this phrase. For whatever reason, the mood had struck him that day to rant about some things that had been plaguing him for a significant number of years. He told me to write everything down, as sometimes he does, and to do so without contradicting him about Snorri or any of the Eddas, of which he loathes with greater passion than the mix up between his kin.

“The first of his name (That’s funny!) was a full Jottun. He may have been an uncle, I’ll come back to it later when I remember. But he was a true pioneer. He was lost in some ancient battle but not before making his mark by being brave, clever, and creating a few paths through Midgard and Jottunhiem before expiring.

Then, there’s my second cousin, Loki the 2nd. And he was my mother’s-err-Laufey’s favorite. Loki and Laufey were-well inseparable, like twins. Meaning they spent much of their childhood together getting in and out of trouble. Usually, that trouble was started by Loki and solved with help from
Laufey.

Anyway, Laufey and Loki came from a huge clan of Jottun. Laufey’s father was the Chieftain, Loki’s father was his younger brother by blood; which doesn’t mean much in Jottun culture. Laufey’s father was sympathetic to the Asir and sought an alliance with them. Mainly because Laufey’s father, was a loyal follower of Bolg, a strong chieftain who sided with Wodin in the first wars to unite the clans. So, there was a bargain struck between the Asir and Laufey’s clan. Part of that alliance was Laufey was to marry Odin, the youngest and only living son of Borr.

Laufey agreed under a condition. She understood Asir politics and wanted to please her father. So, she demanded that Odin and Loki become sworn blood-brothers and that Odin would protect Loki on the battlefield.”

I’m guessing from the way that Loki 3rd is talking, this alliance between the Asir and the aforementioned Jottun Clan (Which Loki will not name) happened due to some impending fight with another race- or clan. He didn’t say which one or why, just that this alliance happened.

“Odin agrees to the conditions. The bargain is struck. Laufey marries Odin and she becomes pregnant with me. Everything is good for a time. Then, wham! Loki goes missing on the battlefield-well missing or dead. No one is really sure what happened. All we do know is that Loki and Odin get separated during a fight. Afterward, in the area where Loki 2nd was last seen standing a defense, there is a circle of corpses but no Loki body. No crater, no black marks, no tracks, just nothing. Poof! To this day, it is a mystery.

Laufey blames Odin for Loki’s death. She takes it hard. By this time, she has delivered me. I’m but a suckling babe. Laufey has already named me. A little time passes, she can’t get over it. She gives Odin the divorce slap and kicks him out, rendering the alliance between the clan and the Asir, pointless. Then, after a time decides she can’t stand to look at me or “hear my mewling calls for milk” So, before I was weaned, I was given to my father, Odin. My milk mother did not treat me well because I was “a half breed” So, Odin went through a few of them. I was about 3 years old when he married Frigga. She adopted me as her true blood son and she raised me like a real mother.

As you can see, there are several reasons why the story gets mashed up and twisted. In addition, those who bear the name are fated to repeat certain-shall we call them tropes? The journey and details may be different, but the vague highlights of prophecy still linger. The theft of some kind of fire, for example, all three Loki’s stole some form of it from someone. But all that is for another time.”
Posted by Kaythia Star at 5:08 PM