Many things occurred, but nothing happened. Not like it was supposed to anyway. The last two years have been unstable. Not only for me but for so many others as well. So, why address it? In one short answer~Therepy. It helps to get it out.

I did have my life under a bit of control. I was healing. It was working.

Someone did not like that. That, someone, was being malicious. I did not want to admit to anyone, including myself, who that person was. Because of being forced to admit who destroyed me. I have not yet recovered. At all. It made things~grief~much worse and I lapsed back into a deep depression. A new kind of depression.

I feel emotionally trapped. Most people who share my style of upbringing and mental illness, do feel the same way I do. But in my particular case, I know exactly what the problem is, and have no idea how to get help or how-to guide myself out of it. The coping skills are not working as effectively as they did before.

What I was doing, what I had learned on my own, was exactly correct. My affirmations, meditations, yoga, Physical training, my reading material, the instructional videos~everything worked!

Unfortunately, I got knocked on my ass by a very unexpected truth. And as I said, it destroyed all that wonderful work. But not in the standard "destroyed." I'm standing in unknown territory now. 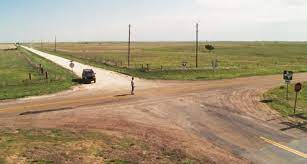 Have you ever seen Castaway? It's a movie from a while ago. The main character is played by Tom
Hanks. (Upcoming spoiler alert)~ So, that movie ends with the main character standing at a dirt crossroads somewhere in Texas. He's just standing there between four roads, not really knowing which direction to take. You see, he let his angel go back home to Texas. He didn't have anything Divine to set his compass too.

For 7 years on that little island, he had that Angel and Wilson. Nobody else. It didn't matter if anyone else thought they were real or not. It mattered that he did. They were real to the main character. They were real. Just like real people, he moved on to something better. And because he made that choice, he lost their friendship. They could not follow him into his new life, wherever or whatever that might be. I often wonder how long did he stand there, overwhelmed with options and grief, before he finally drove on. It wasn't 7 years but it was a significant amount of time without a doubt.

When I came out of my isolation, I found that the world had not moved on that much. Things were different, re-arranged and out of place, but for the most part, the world had not changed at all. I had changed. The way I looked at the world had changed, but the place I came from, the place I settled, the people I had left, had not really changed. Oh, yeah, they were older, maybe changed jobs~or lost jobs in the case of pandemic~ but aside from this, little had moved on to "better" things.

In the end, I imagine this character figured this out. The answer is very simple. If you want to move on,

It doesn't matter which direction you go, you will end up where the Divine needs you to be.

Alternatively, one may opt for the Monk's answer. Which is to sit and wait for the Divine to come to get you. Don't doubt that it will. Eventually. It will get you, like a bad cold.

Regardless of your choice, life is supposed to happen eventually.