The Little Archer and the Half-Troll: A Calontir Story

By Helena Panier
Based on a true story 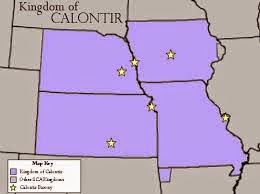 Deep in the heart of the New World, there is a kingdom called Calontir, which means “Heartland” in Anglo-Saxon. Inside this kingdom, there was also a heart. If that heart had a name it would be Beowyrtun, which in Anglo-Saxon means “place of lilies.” This kingdom center has no castles or forts. It has no manor houses or farms. What it does have is strong people who are free to live as they chose. Once a year, the people of Calontir gather together at Beowyrtun to celebrate the summer.
It was one such gathering, not too long ago, that a poor family journeyed to Beowyrtun. They had a son, named Wesley. He liked to spend time on the archery field.

Wesley had a bow and a few arrows. So, he often joined the shoots. But, as every archer knows, sometimes arrows are lost. It wasn't very long that Wesley had lost all his arrows while shooting on the field.

That afternoon, after losing his final arrow, he went to his mother. “Mother,” he said. “I have lost all my arrows on the practice field. Could I have money to buy more? There's a Fletcher in the market place this year.”
“I would give you money, Wesley,” she said. “If I had it.”
“Well, how can I get arrows for the practice field?” He asked.
“The icehouse is always looking for people to deliver ice. Take the little wagon and go do that,” said his mother. 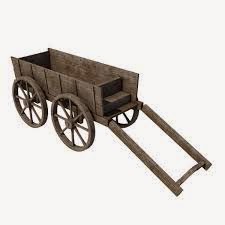 Wesley took the little wagon. He walked the long, hot mile to the Beowyrtun gatehouse where the icehouse sat. Wesley took the ice, packed it in the little wagon, and walked all around Beowyrtun delivering ice. It was a long and hot walk that had to be done very fast. Otherwise, the ice would melt in the July sun. Wesley was a strong, young man who was fast. It only took him a few hours to deliver all ice. He went back to icehouse and they paid him what was owed. When Wesley counted his money, he realized it was not enough.
He went back to his mother. “Mother, I have worked at the icehouse but it is not enough money to buy arrows for the practice field. There is no more ice to deliver. What should I do?”
“The men will be done on the battlefield soon. They will be tired and hungry. Go to the practice field and offer to carry their armor for a fee. They will be happy not to have to carry all that armor in the hot sun, and you will be happy with making money for your arrows.”
Wesley went to the battlefield. There were many men gathered there to practice the shield-wall. When they were done, Wesley could see that his mother was correct. He went about the battlefield asking the men to carry their armor. Some of the men's camps were far away past the bathhouse, some were camped past “Hellingone.” The men paid Wesley to pack his little wagon and pull it to their camps. When they arrived at their camps, they gave Wesley money. Wesley walked back and forth from the battlefield to the far places and back again. Each time, earning a little bit of money. It didn't take long for all the men to disappear from the battlefield back to their camps. Eventually, Wesley had no more to carry. He pulled out his money and counted. Sadly, Wesley discovered that he still didn't have enough money to buy arrows.

As he was walking back to his camp, he became tired. All that walking in the hot sun was finally beginning to tire him out. He decided to go take a shortcut through the woods to get back to camp faster. He turned towards the woods, pulling his little wagon behind him. When he got into the middle, a group of bandit children jumped out from behind the bushes. “Give us all your gold!” They demanded. “Or we will beat you up!”
Wesley drew out his little knife. “No!” He yelled. “You can't have it. I am saving my money for arrows.”
“You can't take us all on. You will have to give it to us.” replied a red-haired kid. “I will order my boys to gang up on you and beat you up and take your money anyway. So, you can give it to us with or without bruises.”
“If I have to chose, then I chose with bruises. Because for each one I get, I will make sure you walk away with one of your own!”
But as Wesley and the Red-haired bandit captain exchanged challenges, a smaller child snuck up behind Wesley. The child pushed him down and took the money out of his pocket. As Wesley stood back up, he heard the kid-bandits laugh as they disappeared into the woods.
Wesley went back to his mother, heartbroken. “Mother, I didn't earn enough money to get my arrows. And the money I did earn was taken by bandits!” He started to cry. All the work, he felt he did for nothing.
“I am sorry that happened, Wesley,” said his mother. She gave him a hug. “Don't worry. I have good news. I made some money today at the market. It isn't everything, but it is half. Tomorrow, go back to icehouse and battlefield. Then, you should have the other half.”
The next day, Wesley did it all again. He walked and walked all over Beowyrtun, trying to earn enough money for arrows. This time, he did not go through the wooded shortcut and made it back to camp. Wesley and his mother put all the money together. “Oh!” said Wesley. “Today wasn't as good as yesterday. I still don't have enough.”
“Go the the market place,” said his mother. “Today is the big shopping day in

Beowyrtun. There might be people who need your little wagon. They can pay to cart their purchases back to camps.”

Wesley went to the marketplace. There were people all around buying things. He asked and asked. But nobody wanted to hire Wesley and his wagon. So, Wesley began to ask people if they would like to ride in his little wagon. People paid him to give little children rides in the wagon. He pulled the wagon back and forth along the market road, for awhile. But then, people stopped. When Wesley counted his money, he discovered that he only needed one more dollar. He asked and asked but nobody would hire his wagon. 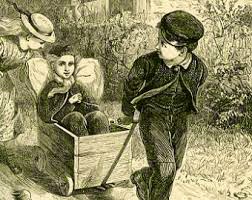 Just as he was ready to give up, he heard a voice from behind him. “I will hire you to pull me.” Wesley turned around. There stood Vilhjalmr Half-troll. He was named Half-troll because he was six and a half feet tall. Vilhjalmr was very strong with arms the size of small trees.
Wesley was an average twelve year old. He still had to tilt his head all the way back to look at Half-troll. “You will give me a dollar to pull you?” He asked.
“Yes,” replied Vilhjalmr Half-troll. “Will you pull me down the market road?” He pulled out his dollar and showed it to Wesley.
Wesley looked at really, big Half-troll up and down. Then, he looked at his very, little wagon. Next, Wesley looked at the dollar. Finally, he looked back at Half-troll, “Yes, I will pull you down market road.”
The very large half-troll, climbed into the very small wagon. He tucked his legs up and said, “I'm ready.”
Wesley picked up the handle of his little wagon and began to pull. But the wagon would not move. Wesley huffed. Then, he began to rock the wagon back and forth, back and forth. Wesley pushed and pulled with all the strength his arms could give. Soon enough, the very little wagon with the very large man began to roll.
Wesley pulled the wagon slowly down the market road. It didn't take long for the people at the market to take notice. It was a comical sight to see a big half-troll in a little wagon, being pulled by a boy down the market road. People began to stare in amazement that Wesley should be strong enough to do such a thing. But for Wesley, it was a matter of getting enough money for arrows.
Wesley continued to pull the wagon with a big half-troll in it. The people were so amazed that they began to cheer him on. “Come on, Wesley! You can do it!” They clapped and yelled. Wesley pulled and pulled. He pulled Half-Troll all the way down the market road.
When he got to the end, he dropped the handle and turned. Vilhjalmr Half-Troll gave Wesley thanks and the money due. The crowd that had gathered there cheered loudly, praising Wesley for his hard work and determination.
The next day, Wesley was on the archery field with his new arrows.
Posted by Kaythia Star at 5:27 PM