A Supernatural Model of Behavior

Okay, so I'm behind the times. 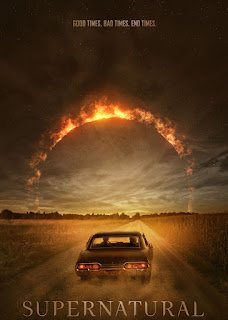 I have not watched Supernatural. I didn't "tune in" while it was popular. I did see the Indiana Apple
Orchard episode once though. The one with the Vanir Scarecrow. I'll be honest. I got mad at the episode because it was portraying my religion in a way I didn't agree with. And if I'm going to be honest I couldn't handle the heavy dose of testosterone and "Dad is the greatest. We gotta find him" thing. (Remember that my relationship with my male role models was horrible. Males being fatherly doesn't exist in my brain.) The car was an issue too.

But I wanted to see it with different eyes. I think I needed to be ready. I needed to find a time when I could be open to the idea that not all males are Narcissistic assholes. The funny part about that is I didn't open myself up to learning that until after my relationship with Loki.

A little side note: I understand now that many times it isn't that males are narcissistic, it's that they are immature, little boys with a fear of growing up. I actually get it now. Our society historically being heavily patriarchal, there is far too much pressure on males to do it all. Being the "man in charge" sucks ass! But it is super easy for an immature male to run away from his physical responsibilities than a female.

Because of my relationship with Loki and my fall from Stone's "Valhalla," I'm open to a closer look at the inner workings of males. I must take responsibility for my part in the "Year of Traumatic Mischief". Since I can't communicate or talk to anyone about it, I have to resolve it by looking into the Hollywood mirror of human behavior. This points to one of Loki's favorite shows, Supernatural. (I also understand that this will not be accurate. I must take it with salt. And that is effin funny!)

I do NOT want to talk about Sam. I like Sam. But he can be ~well, broody~ I have had my fill of broody with Angel. (Completely prefer Spike here.) So, that brings me to Dean. Yes, he is hot. Whatever. Moving on from that.

Here's is a bucket of stereotypical male behavior. This is what I was looking for. Dean dealt with his Dad's death in silence. He threw himself into repairing the car. He got mad at something completely different. Didn't want to talk about it with Sam. Sam and Dean fought about how Dean was processing the emotions. But because Dean wasn't talking about it Sam automatically assumed that he wasn't in a healthy grief cycle.

In this new age, Sam's way of processing grief has been normalized. Everyone is told to talk about it and if a person doesn't, then there must be something wrong with them. But this simply isn't true. Some people, not necessarily guys, don't want to talk about it. Not because they aren't processing but because they are! My male ancestors would understand this. But I have no older male relatives to normalize this for me. I did not understand what that looked like until I watched the first season of Supernatural. I can see it clearly now. It's a very masculine thing to do really. This is very opposite of the Feminine way of doing things. It's common for the feminine to talk about it; dump grief and trauma on anyone who will listen. (Please do NOT confuse feminine with the female and masculine with the male. In energy work and psychology it is not engendered!)

That was my mistake. I cannot tell you how sorry I am for it. I did not recognize that grief can be so silent. On the surface, it looks like disassociation and denial. It looks like apathy. Its mask is deceptive. A male who has worn this mask too many times can make it look easy to wear. The truth is that he is screaming inside. His insides look like my outsides but worse because those emotions are knocking around inside his personal rubber room. A captured tornado of bottled-up emotions behind a mask of safety.

I'm the lucky one. I'm a "girl." I can show those emotions however I like. Eventually, people shrug them off and excuse it with, "She's crazy." Or "It's her period." "Girls" are expected to be crazy. (There are times I look at "acceptable" human behavior rituals and ask myself how the eff someone could come up with that? Why is it that men aren't expected to have emotions but women are expected to over emote? And if either doesn't behave in that way they are wrong somehow?") Something that is just as messed up as is that this is informally accepted on all levels. If a person comes across another person who might appear a little stable in their head, that person will reject the possible healthy relationship for the unhealthy one knowing the unhealthy one is unhealthy! When women say, "Dudes will opt for the easy one." What they are really saying is that a man will choose the crazy one because that is what is expected out of him by Informal American Social traditions. Because girls can't take care of themselves in the "man's" world. And males can't be men unless they are taking care of a female that is just as immature as he is! (BOOM!)

I figure that is one of the many reasons why Dean keeps running from his emotions. It's because he has them; lots of wonderful, horrible, complicated feelings. They are pretty deep. Deans knows himself. When he lets that go, when he finds himself being emotionally intimate with someone, Dean is in love. (Doesn't have to romantic love, BTW. It can be a bromance, fraternal, paternal, whatever) That puts his heart in danger. In his line of work, that is super bad. He saw how it affected his Dad. He knows that he can't afford to appear weak like that. Sam has been protected his whole damn life. Sam has no idea what this means. That doesn't mean Sam is bad, spoiled, or entitled. That doesn't make him a bad guy. It makes him naïve and unknowing.

If I am ever going to be in a relationship ever again I need to be reminded that my [male relationship] does care whether I see or hear him behaving in that way or not. This is a huge thing for me because it involves trust. I have to trust and have faith that another person has value to me and I to them. That idea is extremely difficult for me to wrap my head around. But it isn't for Sam and Dean. Why?

They have each other. They built that relationship over time. Each invested a little at a time. They have a deep brotherly love. It's called Healthy Dependency. So this love helps them through the hard parts of their story. The long lonely drives. When they get bad-mouthed about helping. When they don't get a thank you for saving someone. When they run out of that "save the world because it's the right thing to do" bullshit. When their needs are small but so effin big they can't carry it. They turn to each other for strength. Eventually, Dean will talk to Sam, if Sam is patient enough.

I did not truly understand this. Not really. And I'm sorry.

And it's too late.

I'll do better next time. Maybe I'll do a lot better. I'm hoping Dean will help.