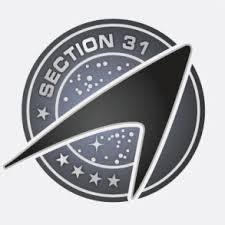 The timelines have become blurred as a result of multiple factors. How can it be that Section 31 has not been affected? With all the changes throughout the Star Trek universe, how is it that there is anyone who can tell what timeline is happening, what happened to shift it, or what steps to be taken to put it back upon the path it should be heading? Who makes that decision? Based on information from where?
It is my belief that Section 31 is far more specific than any person realizes. I believe that Section 31 was created and maintained by a particular person, lost to narrow minded producers and just as equally lame fandom. If we take a moment for a thought experiment, would you...could you open your mind to a simple possibility? And from that, be exposed to a far reaching legacy that no one, except one man, dared to dream possible? Beyond that even, he dared to dream and walked the path to achieve it.
In days long past, in a parallel dimension, there was an Earth that was destined for greatness. It started out much like our own. They had hopes and fears like the ones we have now. Just like us, each country had their version of Homeland Security. The many countries on this Earth formed unions. Each of those Unions combined their Homeland Securities into larger facilities. Then, as those unions formed into Hemispheric factions, they joined their Securities into larger facilities. By the time, this Earth each the early 1980's, it was one of these faction's security facilities that created the Super Beings. This lead to the Eugenics wars. It was after the Eugenics Wars that Zefram Cochran invented the first warp drive. On his first voyage, Zefram managed to be noticed by a Vulcan Ship. They came and introduced themselves. In time, the Earth became part of the Federation. With their help, Earth stabilized and gained the ability to govern itself. It was during these years that information was gathered from the Security Sections from the extinct government factions. This information was kept in a new, centralized system called Section 31.
Many years later, Captain James T. Kirk ordered his ship, the Enterprise, to perform 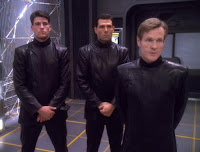 a sling-shot maneuver around the Sun and discovered the ability of Time Travel. He returned safely to his appropriate timeline. But that act caused an up roar within the Federation Administration. Scientists, politicians, admirals, administrators began to ask questions. What did Kirk change in the past? How did it effect us now? How do we know if he is telling the truth? What if a terrorist gets this information, goes back in time, and tries to change our history? How do we know if it hasn't happened already? How can we protect ourselves from the past? There is only one answer. Create a system in which time cannot touch.
“How can we do this? Do not have the technology for that!” they said.
Here is where the mind must open.
A mysterious man enters. He doesn't give his real name, only that he is called The Conductor. “I can provide you with technology to protect yourselves. The only thing I ask is that I oversee the project and maintain it.” After long negotiations and investigation, they agree. A vault is created within the very heart of Section 31. This vault is a room that time cannot touch. Every occurrence that has to do with Time or the Timeline is recorded and filed in this room. The vault is top secret and secure. The vault is so secure, it overshadows, what we know as, Area 51. Few walk in or out of its doors. Only one knows all of its secrets, The Conductor. The Conductor is not evil or good. His only loyalty or concern is the Timeline. He cannot be bribed or persuaded. He serves only the vault and what lies inside.
The Conductor didn't givethe Federation the technology. But he does oversee it. After all, it was he who created it in the first place. And he doesn't just “maintain” it. He has the ability to to guide the time back to it's correct path. This keeps the universe from merging with parallel places, like the militarized one we see in TOS and in Deep Space Nine. This person would also be necessary in the new time line. The Conductor keeps renegades from messing with the time line, or at least he tries. In the new movies, he would have to figure out how to fix what the renegade Romulan broke.
Our new Captain Kirk did not find Khan floating around in space. He did not prevent the Klingon/Human, from poisoning the wheat harvest. This timeline does not factor in all the stuff that the Enterprise experienced during the first three years of it's five year mission! That means that the timeline is missing quite a bit of adventures that the crew should have been addressing. That is really bad.
In the movie, Into Darknessas Kirk is planning on taking a Klingon ship to the Klingon Homeworld, if you listen closely you can hear Sulu's voice over the intercom. It announces that they will use the a ship from the “Mudd Incident.” That incident was supposed to be experienced by the crew of the Enterprise. But it was not. Who then? Who is it that is directing all the things that were supposed to happen by the crew in the early years of that five year mission? Because from the audiences point of view, this is still happening by someone, somewhere. These small, basic details that have heavy direct influence is being conducted by someone with unique knowledge from the confines of Section 31.
This person has to be special. This person needs the ability to time travel himself. He needs to be able to exist in multiple timelines and none at all simultaneously. He needs intimate knowledge of all these timelines to guide it back to the correct path. He needs intimate knowledge to be able to do that without anyone realizing it, so it appears that it is a natural course.
There is only one person in all of the Star Trek franchise who has the ability and the knowledge to do anything like this. We have already met him. You may have even hated him. But the fact is that Gene Roddenberry wrote him in for himself, not the audience. 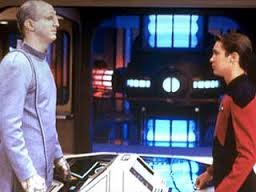 You may think I am nuts for having a theory like this. But I do not think so. Writers often do crazy things, just like this. But because Gene died, we will never really know if this is correct or not. Personally, I think it's true and Gene is laughing at it in the beyond.

But if this is true, then where is Wesley during this time of greatest need? Did Admiral Marcus do something to Wesley? How did Admiral Marcus get the information from Section 31 in the first place? Wesley would not have just let  him have it or just given it to him. He could have smuggled it out.

Now, here is the real meat of our story. What did Admiral Marcus do to get the information away from or out of Wesley's hands? How do you trap a Time Lord?

Will Khan have to save Wesley from something? Because Khan knows who Wesley is. Khan has to know. Khan is the only other person who does know of Wesley's existence. When Kahn was in Section 31 building the warship, he would have discovered something beyond what was expected. Khan is brilliant and would have made a conclusion based on information stored within the files. So, will the final showdown be between Wesley and Khan?