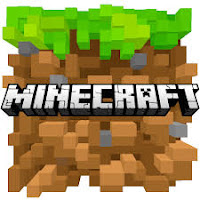 If Minecraft had a beginning Myth, I imagine it would go something similar to this....

From the light of an empty place, came Notch. He came to the empty place to make a world of happiness and peace. Noch spent many years creating that world. But he was lonely. He sent out an invitation throughout the Other Worlds on the Winds of Ether. Many came in those beginning days.

The world was not completely devoid of life. Before the first men, there were pigs, sheep, and chickaducks. These animals were good and helped the first men built that world. But that was not the only "life" upon that world during the time of first men. During the creation, Notch made a mistake. He took a pig and twisted it. The creature turned green, stood upright on four legs. It moved as silent as cat footfalls. When it found the first men, it hissed and exploded. Notch could not undo what he created. He called it "Creeper" and let it out into that world.

Notch said, "Let this world have balance. For no world is easy to live in and men must have challenges to overcome." As the first men lived in the new world, they discovered that Notch words held true. In any new world, there must be a balance. Where there is creation, there must be death. And from that world and the wisdom of Notch, skeletons, spiders, zombies, rose from the ether of that world.

In those beginning days, the world was not complete. Notch and those who came by invitation were good. They helped Notch create the world, by living in that world. These first men built strong fortresses and many mountains. But they spent most of their time underground, discovering resources. Soon those men realized they were men no more. They were dwarfs. They crafted more than fortresses, mountains, and elaborate mines. They were shaping a new world with farms and gardens.

It is also true that in the beginning, Notch made the first man. His name was "Steve." Notch gave him the ability to punch wood as his first action. Then, Notch taught him how to make tools to dig and farm. All other men who came after were also named Steve and created in that image. Until Steve learned to change his skin.

The first men looked to Notch and asked, "Is this right? Is this good?"

"It is good," said Notch. "All men may choose a new skin if they so desire. For it is my will that all men have the heart of Steve and it shall remain so, always." This is why, at the moment of death, men shed their skin and return, for an instant, to the skin of Steve before expiring.

Notch and the first men continued to build the world together. As they worked, they changed to dwarfs. They added new things, like trees, animals, rain, and snow. The skies began to thunder and lightening. New metals appeared in the layers of the earth. Tools and Technology were born. These were the golden days.

But also in these days, some of the first dwarfs began to hate each other. Some grew jealous of Notch, himself. The bitterness in this world shaped seeds within those first dwarfs. This seed made them change. They turned evil and became trolls.

The first dwarfs looked to Notch. "Is this good? Is this right?"

"No," said Notch. "These trolls are not good or right. But what is made, in this way,  cannot be unmade by my hands. Nor can it be stopped by my hands. It must be unmade by the trolls, themselves.  I am able to make it harder for them."

Notch chose a few good men. To them, he taught the Code of Security. They became his army. They also helped shape the world.

But the world of Notch had become many thousands of worlds. The cubed seeds of his world had been sent upon the Winds of Ether. These seeds were planted beyond the reach of Notch. Those worlds were at the mercy of trolls. Some of these worlds became legends. The Legend of X and the Legend of Yogs are two of those.

In the beginning days, the first dwarfs made temples to Notch. These temples were made of gold bricks and gleamed in the light. The first dwarfs looked to Notch and said, "Look! We have made a place for you. Does it please you?"

Notch shook his head. "I am not a god. I am like you. I am a creator of worlds, only," he said. "It is funny that you should do this. Thank you for your kindness." and he laughed. The first dwarfs laughed too. Because it was a funny joke. It was a joke of kindness. The first dwarfs built these "temples" only to be thankful for the Cubed Seed not as a place of worship. The temples that were built were left empty and abandoned.

The trolls came. In the beginning, it was one at a time. Then, they gathered in clans and tribes. They came and ransacked the first dwarfs and all they built. The first dwarfs looked to the Code of Security.  But no matter how often they sought to make it better, the trolls still got into the worlds. Trolls came with fire, pickaxe, and shovel. They destroyed many good worlds.

The trolls are still roaming on the Winds of Ether, looking for good worlds to destroy.


Of course, this is a tongue-in-cheek version of what a Minecraft Mythos might look like if it were written a few hundred year in the future.