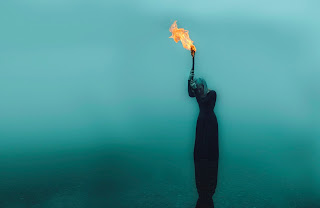 In a land not too far away, there was a young girl. She grew up on an isolated farm. When she came of age, she told her parents that she wanted something more than a farm. Her parents told her that the world was not safe. They told her that a girls place was at home and married. Then, they arranged for her to marry.

The girl went to the nearest town. It was dirty and crowded. She tried to find a job. But she was not educated or pretty enough. Many people in the town told her to go away. She gave up on this town. The girl went to the next town and was told the same. She did not give up. She spent many years traveling and looking. Until, she was very far from home.

While she traveled from town to town down many roads, she discovered that where ever she went the roads were filled with torches. Some were used up and tossed to the side, but there were many that were only used partly or not at all. The girl had no home. She was hungry and had no money. She did not have a job. She also had enough of crying. She looked along the road, with its many discarded torches and said, "If I can't find a job, I will make one!" The girl gathered up all the torches she could. Using bits of other torches, she made new ones. She walked the road gathering up old torches and selling new ones. It was a heavy load but she endured.

The girl discovered that selling torches was not as easy as she thought. The roads were very dark at night, that part was true. But people will only want a torch, when the roads are the darkest. Some people already had torches. There were some people who had too many torches. Some people were willing to carry used torches that did not burn. There were some who did not have money to pay for a torch, but needed one just the same. Then, there were some who needed torches, but pretended not too even though they had money. This confused and frustrated the girl, enormously.

The girl finally stopped selling torches. Instead, she gave them away for donations. The problems changed but did not go away. She would spend many hours making new torches and after, have nothing to show for it. People came to her and took torches they did not need and left no donations. Some accused her of trickery or called her "crazy torch girl." A few did come who needed a torch and had no money. They would thank her for her kindness but these people were so few, she often cried. Then, the worst of them would come and steal her torches, claim it was theirs, and go away not even saying thank you.

The girl decided this wasn't going to work either. So, she made many torches and lined them up on her part of the road. Every night she lit them, making the road a safer place. As people walked past, she would ask for a toll. This did not work at all. So, she changed and asked for donations. Many people would shake their heads and refuse. Some even complained that the road was not bright enough or too bright. They made many excuses not to give.

Then, one day, town officials came. The girl had made her part of the road safe by lining it with torches. The town said this was a good idea. So, the officials lined the road with new, bright torches. Then, hired someone else to light them and watch them!

This was when the girl cried the longest and the hardest. She had no money. She had no employment. The town took away her purpose. She started to walk home. Along the road, she could hear people from the town calling at her, "Go home, crazy torch girl! No one wants you here! Go back to your dirty farm!" They laughed and told each other, "She actually thought she could sell torches on the road! What a stupid girl."

You see, while the girl was trying hard to make a place for herself, she forgot that people only want torches when it is the darkest. No one wants to buy a torch in the day or during the summer nights. They only want a torch when it is cold and dark.

Winter and darkness came, as it does. The road to town became dark. The person the town hired to care for the torches did not want to be in the cold and snow. He left and did not return. At the end of December, people asked, "Where is that torch girl? Why isn't she looking after the torches? She was a nice girl."

But she was gone and they could not find her. The town's folk got angry. "Where is the torch girl? Our road needs her, the road is too dark!"

An old man looked at the people. "You chased her away! All of you chased her away. You called her "crazy torch girl" and "stupid girl." You told her to go back to her dirty farm. You did not make a place for her. You took her purpose away. She tried to find employment and you refused her. Then, when she made her own job, you took that too! Where do you think she is? Home! Where you sent her. And now when it is darkest, you want her back?" The old man pointed at them. "Shame on you all!"

The girl went home. She learned a hard lesson. "People do not like honesty and integrity. People do not like kindness and love. People are frightened by good people. It is important not to be a torch girl."
Posted by Kaythia Star at 9:32 AM