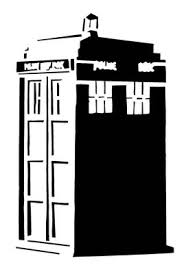 I followed the Doctor.  We finally found an unguarded terminal. Pulling out his screwdriver, he made quick work of infiltrating their systems databanks. "Jessica, keep a look out." I turned away and watched the halls. I could hear him tapping away at the touchscreen keyboard. "Constantine, apparently, got involved in a skirmish with the Daleks above their planet. Constantine sacrificed himself and his ship to destroy the Dalek fleet. He crashed on the planet surface. He...oh..."
"Don't get sentimental, Doctor. No time," I whispered.
The shadow man cleared his throat. "Right," he said. "Uh, well, Constantine did not die right away. He lingered, unable to regenerate I am guessing." The Doctor paused and played with the terminal again. "As he lingered in a death state, he kept muttering something about a cup with the Elixir of Life and the "Grail." The Doctor nodded. "Constantine is correct. The Elixir would have been able to save him. But in his delirium, he must not have realized he wasn't on Gallifrey or Karn." There was a moment of silence again; then he went on. "When questioned about the Elixir, Constantine answered that it held the key of immortality and the ability to transmute metals into gold. Yes, that part is correct too."
I turned around towards the Doctor. "Wait. Are you saying that is real? As in really real? As in not a metaphor or a story, but something that I could touch?"
"Yeah," replied the Doctor. "So?"
"The Holy Grail?"
The shadow man dismissed me. "No, not for you. Only for us. And it isn't "Holy." It has nothing to do with blood, holding the blood of a saint, or anything like that."
"I imagine not! As you said not too long ago, religion and myth usually turn out completely different than you would think. But the idea of it," I shook my head. "The idea of 'The Holy Grail' spread like confetti throughout time and space. Like bread and fast food. It seems pretty amazing."
He tilted his head. "Yeah, you're right. That is pretty epic. On the surface, all the stories look the same, but when you think about it. The details, well, as they say, the devil is in the details."
"So, what about the Grail. What does it say?"
The Doctor looked back at the terminal. "It says that Constantine kept asking for the cup, which they took as 'The Holy Grail' due to a description from their own myths." he turned and pointed at me. "Which are very similar to that of Earth's legends. Validation." He turned back and continued to read. "And according to death customs of the species, their honored dead cannot rest in the afterlife until the last wishes of the deceased are fore filled. Since Constantine was given, well what is considered Sainthood, He can not proceed to the...Ugh! Not this again!"
"What?"
"Nothing," He continued reading. "He cannot ascend into the Promised Land until the Grail has been located and presented to his body. They have been on a several thousand year Crusade to find the correct cup; which eventually took them off their own planet."
"But they are robots, Doctor! That is not logical!" I hissed. "Robots do not have a concept of 'afterlife."
"Who says that?" He asked. His hand moved up to what should be his face. It made a swiping motion. Then, descended in a downward movement.
"Because they are...Doctor? Do you wear glasses?"
"Yes. For reading."
I shook my head. "Okay, not important. Robots. No concept. Because they are programmed."
"Mmmm...no."
"What?"
"Yeah. Cybermen have a concept of an afterlife. When their bodies no longer function they are uploaded into, what they call, the Promised Land; which is basically a Cyberman singularity. A hive mind for dead robots." I did not respond. "Much better than a Dalek afterlife, let me tell you. Spending eternity in a sewer and feeling your physical form decay and liquefy; much worse."  The shadow man nodded at me.
"All right. Let me rephrase then. Were they always robots?"
"Hm, good question." He turned back to the unit. "It doesn't say. What it does say is that there is a code of chivalry and a strict adherence to honor. A lot like the Medieval Knights of your Earth." The Doctor paused. "Oh, that takes me back. Geoffrey."
There was an approaching stomping sound coming from down the hall. "Doctor!" I whispered. "Not now."
"Oh yes. Not to worry. I know the code now," he said, casually.
"So plan?"
"Yes. Wave the white flag and ask for parlay," he said. "This time we will surrender on our terms, not theirs.”