After watching Star Trek: Into Darkness a couple times, a thought occurred to me. At first, I laughed it off. But then, I decided it wasn't so improbable.


There is no direct connection between these two characters, but without knowing details John Harrison appeared to have no direct connection to Khan. Let's start with the facts. We must begin with the facts as they are laid out in Star Trek: TOS. Even though Star Trek: Into Darkness alters the timeline, it does not alter the base facts of the origin story of Noonien Khan. (Why didn't I just call him Khan. Lolz, more to come on that.) 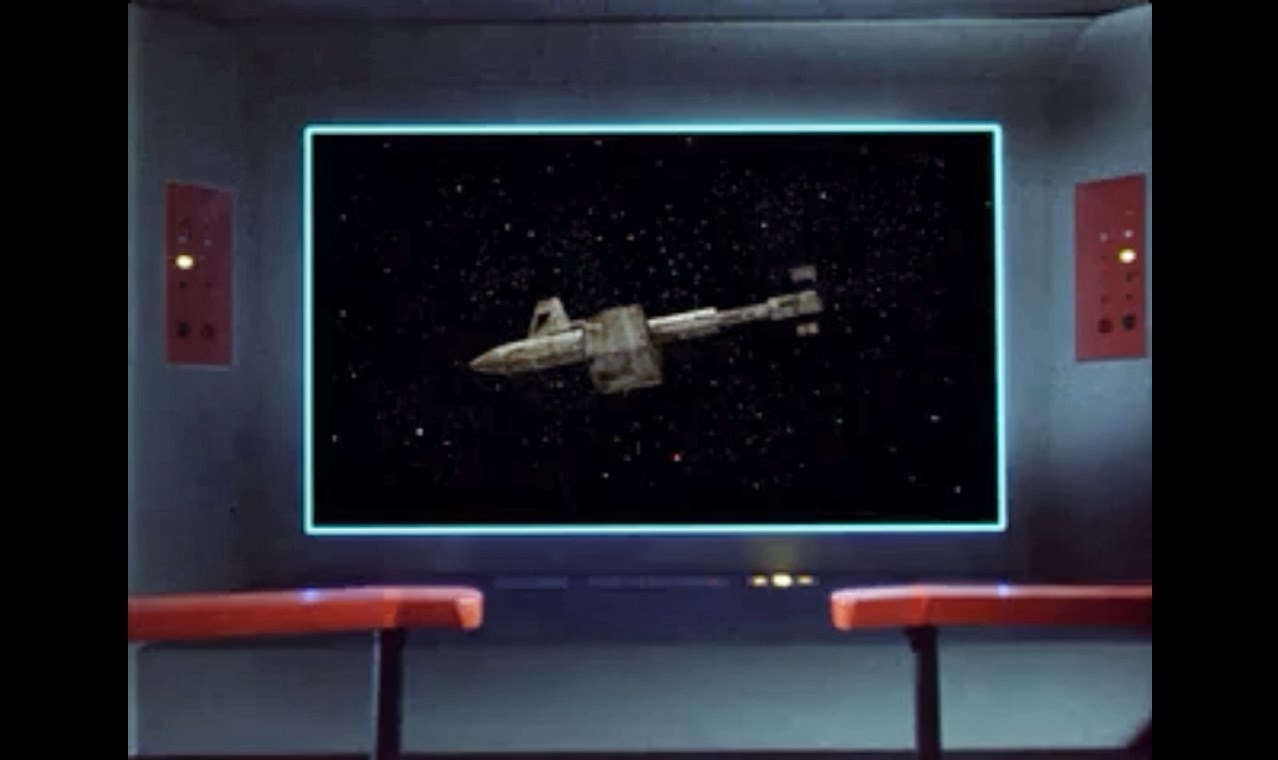 The episode opens with the Enterprise discovering a DY100 class vessel. This vessel was designed specifically to be an interplanetary transport vessel. It has nuclear-powered engines. Spock goes on to say that these vessels were impractical for use. The cost of building such a vessel was extremely costly. Because of the Eugenics warS, (notice the PLURAL here...) the remaining countries did not have the resources to arbitrarily build one at the end of the war. So how did it come to be that THIS vessel, which has no record of being built OR a launch date, could be floating out in space 200 years after the fact?


Based on the facts, we can conclude that this vessel was the absolute, final contingency plan for Noonien Khan. In the event of his failure, he or his people would never be able to find sanctuary anywhere on Earth. Consider for a moment the subsequent, worldwide sitings of Hitler AFTER his reported death in Germany. On the other end of the spectrum, the subsequent, worldwide sitings of Elvis AFTER his reported death. The point I am making is that Noonien Khan or any of the Eugenics Wars Leaders would not have found any peace IF they did somehow escape capture and eventual “crimes against humanity” And in this case, like all others proceeding this one, those leaders would be tried and condemned to be executed. Why would A very intelligent leader NOT consider an escape that that involves secretly building a space vessel for an escape plan? Is it not a great leader who can have contingency plans for everything?


This conclusion for fills motives for its creation. Where the resources for the vessel construction came from. Why the vessel was never documented as being created. Why the vessel’s launch was not recorded. Why it didn't have a specific destination. It explains the crew's makeup. (more to come on that note)
How about that name? Botany Bay? The name for a penal colony, right?


Noonien Khan's little inside joke, my friend. Because Noonien Khan built the Botany Bay! He tells Kirk he is an Engineer in the Sick Bay. Why wouldn't he name his own ship? 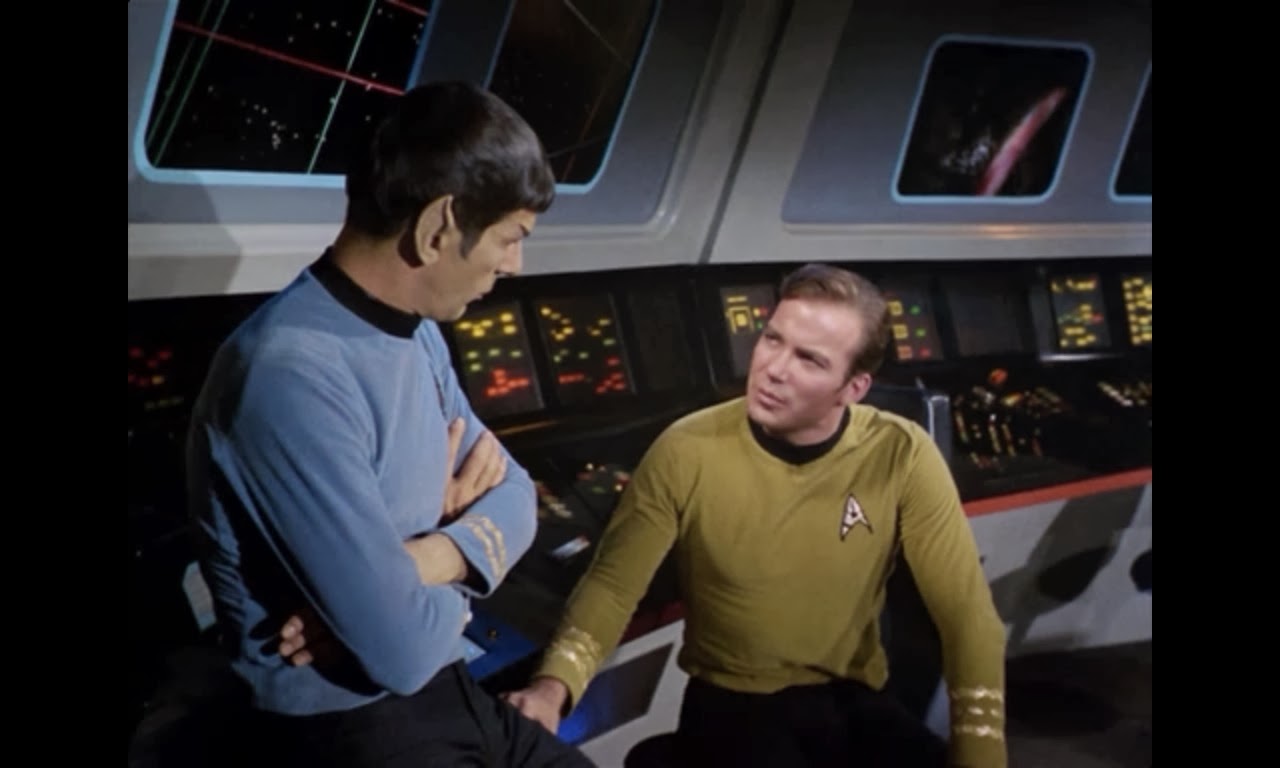 Spock: “[Captain] If you are suggesting this is a penal deportation vessel, you've arrived at a totally illogical conclusion. You're earth was on the verge of a dark ages. Whole populations were being bombed out of existence. A group of criminals could have been dealt with far more efficiently than wasting one of their most advanced spaceships.”


Building a ship is not a small undertaking. It requires people and lots of them, welders, engineers, scientists, programers, maintenance crews, equipment, etc. Seriously, this isn't anything to sneeze at. HOW does a leader, on the level of Alexander the great, Keep plans like this a secret? You build it yourself and the contractors you DO hire, when they are done with the mission, you kill them. This has been done for ages and ages. There are stories of great Kings building castles and then killing the engineers. So why would Khan be any different? He wouldn't.


Also, Spock implies (I say implies because Spock cannot say for sure with the lack of document able evidence) that the people on this ship are ALL Eugenics War leaders. And Noonien indirectly admits it at dinner.


Spock: “I have collected some names and made some counts. By estimate, there were some 80 or 90 of these young supermen unaccounted for when they were finally defeated.”


Yeah, Spock. And 84 of them ended up on the Botany Bay! Scotty gives a count for Capt. Kirk when he makes his report. 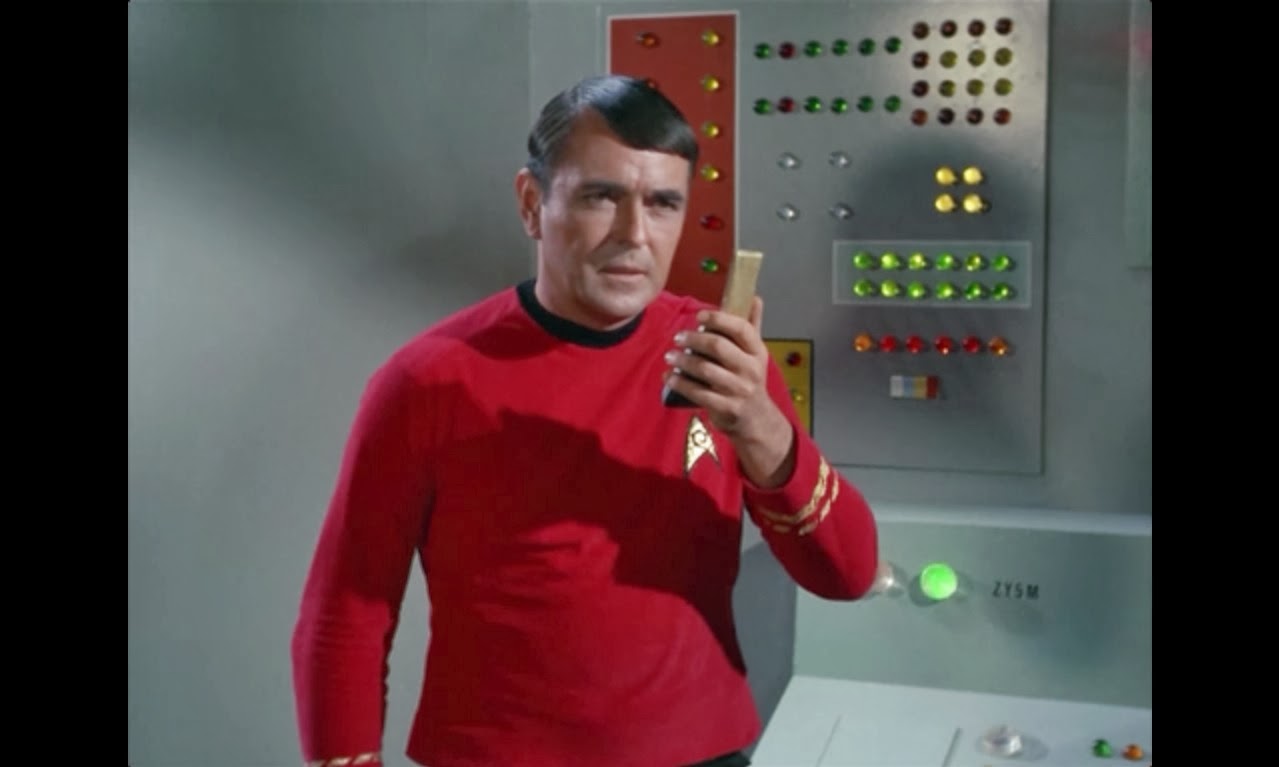 
That means that Noonien Khan is the Leader of the leaders. (He was woken up first on the ship) That is why he is such a powerful character. Think about it a moment. Noonien Khan is the elected leader of a GROUP of tyrannical, genetically engineered humans. Is it any wonder that he is so...well you get the idea of the danger surrounding this being. Also keep in mind that Spock specifically says that these people simultaneously seized power in over 40 nations. Danger doesn't even begin to cover the power of this fact. Which brings me to mention something that has been bothering me for many years.


Khan is a title NOT a name. The First Khan was Genghis, then Kubli followed him. But throughout history, there have been many Khans and Kahkans in Asia, which is where this title originates. The greatest of these being Genghis. He, so much like Alexander the Great, won many campaigns completely on the spread of propaganda. When Noonien tells Kirk that his name is Khan, he isn't telling a possible enemy his real name. A leader of this level skill and mindfulness is not going to give anyone any details of his true identity. Not while he has a choice or thinks he can manipulate the situation. It bothered me when the writer and director for Star Trek:Into Darkness wrote Benedict's line as


Like Kirk is supposed to know who that is. That line was specifically written for the audience and not the story line. Otherwise, the line should have been:


It is true that Botany Bay was the name of a penal colony in the new world. It is ALSO true that Botany Bay was/is the name of the area that had MORE immigrants than prisoners. Often when prisoners did their time, they were given land and a second chance in the new world. Botany Bay was an important colony. In the 1960's, there was a scholarly debate over the main reason for the establishment of this colony. Some argued that it's main focus was that it was a penal colony. Others argued that the colony was meant to use prisoners as cheap labor for the establishment of a trading post. This post was to provide much needed natural resources back to the British Empire. To the open minded, both of these arguments are logical. Why does the colonization of a new land or world have to have a “main focus” For historians, a “main focus” is a ludicrous idea. It is FACT that humans do things for many reasons, not just one. Why would it be any different for fictional characters? So Khan's little joke is that he has escaped to a second chance in a new world. Lolz..Noonien...very funny.


This is all evidence to show how much planning Noonien Khan makes into ONE single venture and how much strategy and how many steps ahead he thinks. It is a logical conclusion and statement to say that, “Khan always has a way out.” This is important later...actually about 15 years later...


I also want to say that Noonien Khan, like Genghis his predecessor, was an extremely successful leader. Kirk, Spock, Scotty, and Bones talk about it at a debriefing later. 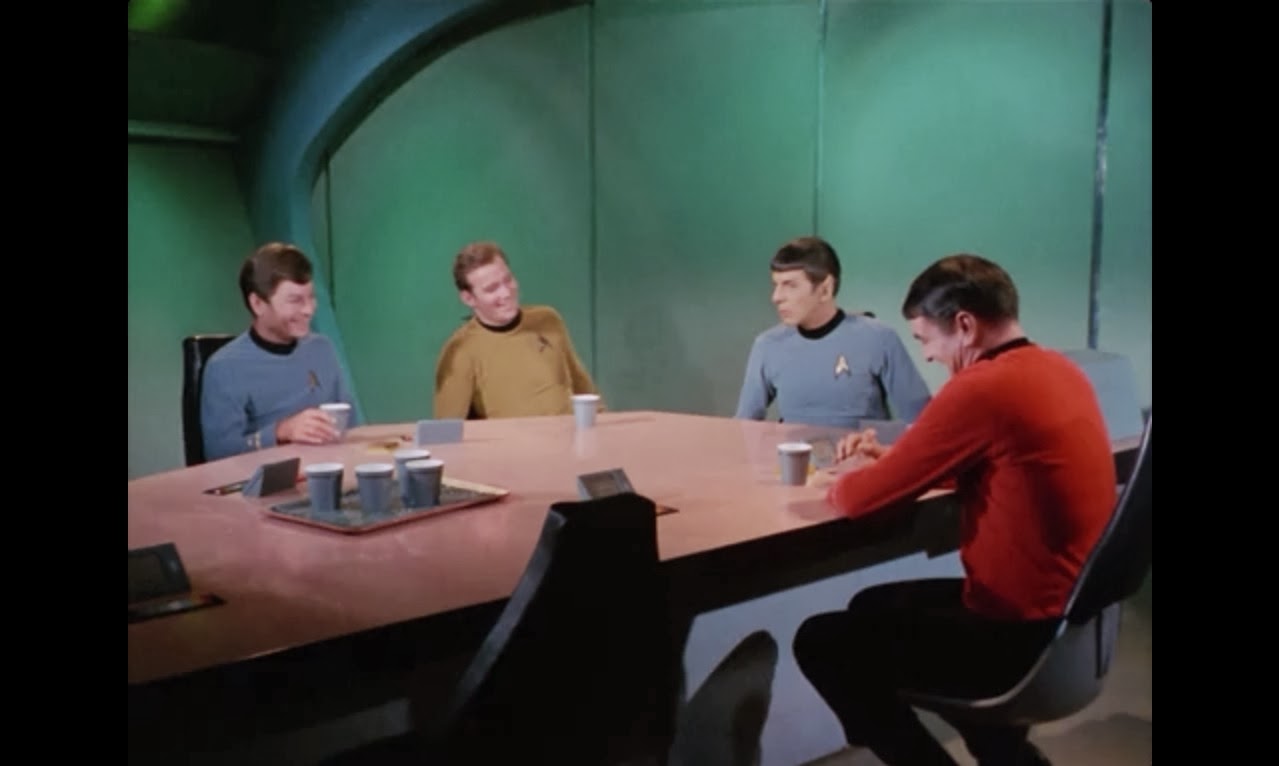 Kirk: “He was the best of the tyrants and the most dangerous. They were supermen in a sense. Stronger, braver, certainly more ambitious, more daring.”


Spock: “Gentlemen, this romanticism about a ruthless dictator is--”


Kirk: “Mr. Spock, we humans have a streak of barbarism in us. Appalling, but there, nevertheless.”


Scotty: “There were no massacres under his rule.”


Spock: “And as little freedom”


Bones: “No wars until he was attacked.”


Where in ANY documentation did it say that Noonien Khan was trying to breed a race of genetically superior human? Where does it say ANYWHERE that Noonien Khan was practicing the same type of ethnic or genetic cleansing? Spock certainly outright accuses him of doing so in the new time line. It appears that Kirk has also jumped to this conclusion when he confronts Noonien Khan about his true identity. But is it that simple? I don't buy it. Great leaders like this don't usually, as a rule, go around killing people like that. Not a leader who rules a good diverse crew like the one found on his ship. You heard Scotty at the beginning of the episode.


Scotty; “No Change, and they're all mixed types—Western, Mid-European, Latin, Oriental.”


Khan's crew represents what the diversity of mankind could be. Almost like what Davros tried to achieve with the Daleks, an evolved, superior form of Kaled. One that would survive harsh conditions and bring peace to the world at war. This difference here is that Noonien would have been successful if given the chance, just like Genghis. And someone didn't like that idea. Noonien Khan was not a leader to kill off the diversity of his subjects. Instead, I propose that Noonien Khan was a victim of propaganda.


Consider a political motive. The Middle East has been fighting for hundreds of years. Thousands, actually. Could it be possible that the rest of the world, fed up to the ears with their bullshit, finally step up and said: “Fuckin stop it already or we will do something.”?


So, some Scientist gets together and create a super human. One capable of bringing an area of the world, that has been chaotic for a thousand years, under some kind of control. Isn't this what Genghis did? I think so. So then, when he does break a few eggs because it IS going to happen whether you like it or not, people get up in arms over that fact?


That's like kidnapping a person, starving them, giving them a cake, telling them they can't eat it, and if they do they will be tried and executed. What the hell kind of logic is that?


So, Khan is successful in bringing about unification to a large area. Is it his fault that the others can't get along? A few bad apples in the barrel doesn't mean they are all not worth eating!


My point is that I don't think Khan is guilty of what Spock is accusing him of, at least not the "war crimes" implied by Spock. I think that, like Mark Anthony, Khan was a victim of propaganda. Documentation, you ask? History is written by the victors. What makes you think any of that history would be accurate anyway?


Noonien Khan is disappointed by little humans have evolved. The lack of destination of the Botany Bay was on purpose. Could it be that Noonien Khan used the cryogenic chambers not to escape to a predetermined location but a predetermined TIME PERIOD? A time when he thought humans would have evolved to his level of superiority in intellect, physical prowess, and technology? A time in which he could flourish alongside humans instead of forging forward alone and outcast? A man beyond his own time, a pioneer in multiple disciplines, with the ability to excel in every single one. He had failed his mission once more when Kirk assumed the worst about him and his people.


But Kirk decided to put him on his own planet. Things would be tough, but Noonien Khan is tough. They would make it as a colony. Noonien was given that second chance and with a wife too. At the end of this episode all seemed to work out. Until 15 years later...